According to Seneca, what is man’s unique good? How should a good man conduct himself?  Seneca (4 BC-65 AD) was a Roman Stoic philosopher.  In his letters to Lucilius, he portrays the unique good of man that separates him form all other beings.  Human reason, according to Seneca, is the characteristic of man that separates mankind from animals.  Human reason is man’s unique good, therefore for a good man to conduct himself he must exercise this exclusive quality.   To live a good life, man must exercise and expand his ability to reason.  This is the real value of man in his opinion, therefore man must pursue that value.

Trajan’s column.  Among the many unique pieces of Roman art, Trajan’s column, has been one of the surviving architectural monuments.  The construction of this triumphal column began in 106 AD was completed in 113 AD.  The piece of art honors the Roman Emperor Trajan’s victory in the Dacian wars.  The depictions on this piece are extremely detailed, and well preserved. Every scene on the column demonstrates in detail the Romans in war with the Dacians, and their victory.  The detail of these depictions is very helpful to historians because they tell the stories of Roman life during the Dacian wars.

The figure that currently sits on top is a statue of St. Peter that was installed by a renaissance pope in 1588.  During the lifetime of the emperor, there was a bronze eagle on top which was replaced by a bronze statue of Trajan after his death.

Trajan’s column is, in my opinion, one of the best examples of the artistic architectural talent of the Romans 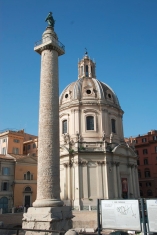